While we don't have much in the way of press reports about the Percuil Village Regatta, we do have are a condensed version of Percuil Sailing Club's Minutes from its foundation on July 19th, 1949, which forms the gist of this account.

It notes that “A group of 3 keen sailors who used to race each other decided that it was time to establish a Sailing Club specifically to re-establish the Regatta. ... It took place on the old tree trunk washed up on the beach by the oyster shed.”

The Regatta duly took place sometime between 11th August and the 30th August of 1949 (the Minutes don’t show the actual date!).

By 1950 the Club was working collaboratively with Portscatho Regatta Committee. The Regatta expanded beyond sailing and included rowing and children’s races event and of course regatta teas Three silver cups were donated – the Wimbush, the Weatheroak and the Freelance Junior Cup. In 1961, the Wimbush Cup's donor was asked to remove his cup, in somewhat mysterious circumstances.

Car parking and ordinance were two important perennial issues. At that time starts (and finishing) included the firing of shotguns (without pellets), or cannon.

A whole army of locals also joined in at the Regatta to set up the Children’s Races or to organise the Rowing and Swimming Races that took place from the beach. The early class racing included a variety of dinghies, many of which are still raced (and a few which have disappeared) – Dragons, Tumlarens (a design lauded by Uffa Fox), 18’restricted, St Mawes OD, Redwings, National 12s, Cadets, and RNSA dinghies. Regatta prizes were a princely £1-10s (that's £1.50 post decimalisation) for the winner and £1 for second place.

Proximity to St Mawes did not guarantee communication, and in 1963 St Mawes SC (presumably a reference to St Mawes Town Regatta?) and Percuil chose the same date for their Regatta. The minutes do not note how this was resolved. Fortunately, in 1965 the Club joined PoFSA (at last) and perhaps selection of Regatta days was amicably resolved with respect to all the local organisations. However, cooperation between the two clubs seems cursory at best, despite their many joint interests and concerns.

Even in the late 60s, the cannon was being used, since a minute notes the issuing of earplugs, and later a plea not to use full charge cartridges (health & safety gone mad!).

Handicaps are a recurrent theme in all sailing organisations, and this is true here too. At a PoFSA meeting discussing handicaps the Percuil representative said that he thought IOR ratings “a waste of time” and that “as a club we should be encouraging one-design racing.” This may be an inkling of the arrival of the Ajaxes. By 1974 there were 6 Ajaxes racing from the river and reciprocal arrangements for entering evening racing between St Mawes and Percuil were formalised. The Regatta for that year had over 160 entries.

And then it goes quiet... 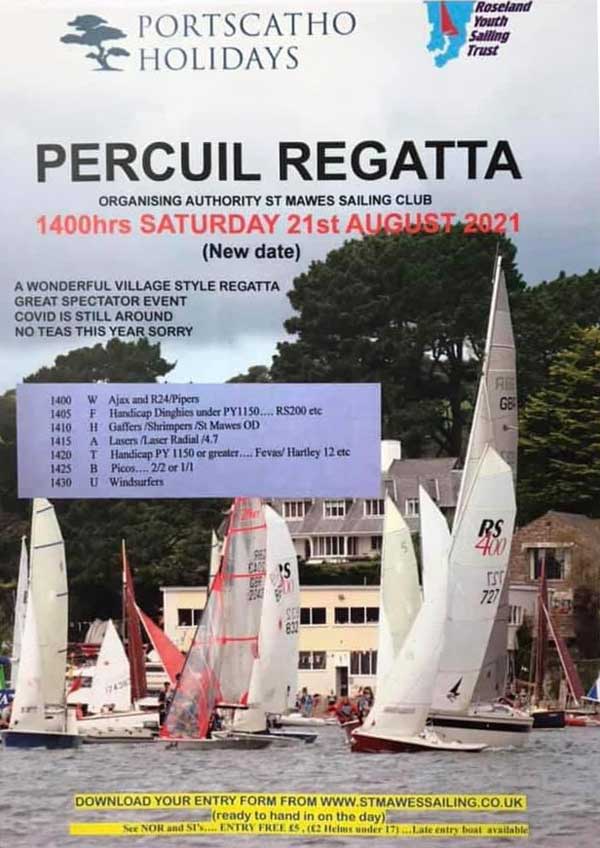